Today, virtually every other motor oil manufacturer has recognized the superiority of synthetic lubricants and has followed the AMSOIL lead by introductions of synthetic motor oils of their own although mostly are not 100% pure synthetic like AMSOIL is; they are Group III Hydroisomerized petroleum oils, marketed as synthetics under a new law. They spend millions of dollars advertising their “new” and “revolutionary” products. No one, however, can match AMSOIL experience and technological know-how. And no company in the world delivers products like AMSOIL.

Petroleum motor oil's film strength is about 400 psi where as AMSOIL lubricants film strength is about 3300 psi and does not break down, shear or loose viscosity under heat and stress. Petroleum motor oil breaks down under heat and stress and leaves carbon, varnish and sludge deposits in the engine and allows critical engine components to wear much more rapidly.

We are your one stop source for world's best ultra premium Synthetic Motor Oil and filtration products, which outperforms just about any other competing products like Mobil 1, Quaker State, Pennzoil, Castrol syntec and every other synthetic and conventional petroleum motor oil in the world. See the ASTM test results and learn the facts. AMSOIL saves you time and money.

During Lieutenant Colonel Al Amatuzio's 25 years as an award-winning jet fighter pilot, he gained a solid appreciation for the extraordinary lubricants that protected the engines of the jets he flew. He knew that only these lubricants, synthetic lubricants, could stand up to the demanding operating conditions of jet engines and the severe temperature extremes they encounter. He knew also that the same outstanding performance benefits synthetic lubricants provide for jet engines would prove invaluable to car, truck and other internal combustion engines.

In the mid-1960s, Al Amatuzio began an intense period of research and development. He assembled the industry's most knowledgeable chemists and directed the formulation of the first synthetic motor oil in the world to meet American Petroleum Institute service requirements. 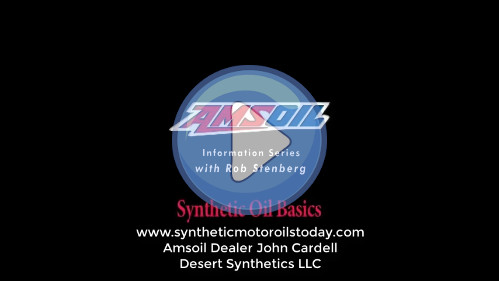 Today, virtually every other motor oil manufacturer has recognized the superiority of synthetic lubricants and has followed the AMSOIL lead with introductions of synthetic motor oils of their own. They spend millions of dollars advertising their “new” and “revolutionary” products. No one, however, can match AMSOIL experience and technological know-how. And no one delivers products like AMSOIL. Accept no substitutes — AMSOIL is “The First in Synthetics”®

The AMSOIL building is a beautiful, historic building located on Superior's Tower Avenue. Originally built in 1892 as part of the city's Berkshire Block, the building is constructed in an elegant Romanesque architectural style with Kasota limestone from Southern Minnesota.

The AMSOIL corporate head-quarters feature state-of-the-art facilities, including a new business computer system and modern telecommunications devices. Staying on top of current technology reflects the AMSOIL commitment to producing the world's finest lubrication products, fast and efficient order processing and excellent customer service. Throughout its more than 100-year history, the AMSOIL building has had many occupants, the first being the State Bank of Wisconsin. Physicians, attorneys, and Superior's first television station have also called the building home over the years. It became the AMSOIL building in 1978 and has been completely renovated.

The AMSOIL research lab has been redesigned to incorporate more of the latest cutting edge technology and research equipment. The overall size of the facility was doubled, allowing more capacity for testing, formulating and research.

Technical services is located at one end of the Superior Distribution Center. The newly remodeled facilities also include areas for manufacturing, industrial and technical sales personnel.

However, the industry is slowly but surely coming around. Vehicle manufacturers typically suggest 5,000- to 7,500-mile intervals in their owners manuals, and many manufacturers have also started incorporating oil life monitors into their vehicles, allowing motorists to safely extend drain intervals by monitoring oil life and alerting drivers when the oil needs changing. Competing oil companies have also begun marketing their own synthetics, some claiming service lives extending beyond 3,000 miles.