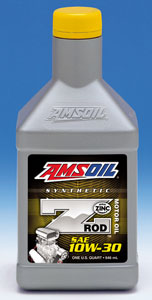 AMSOIL Z-ROD™ Synthetic Motor Oil is specially engineered for classic and high-performance vehicles. It features a high-zinc formulation to prevent wear on flat-tappet camshafts and other critical engine components, along with a proprietary blend of rust and corrosion inhibitors for added protection during long-term storage. Z-ROD Synthetic Motor Oil is designed to perform on the street and protect during storage.

AMSOIL, the leader in automotive synthetic lubrication, produced the world’s first API-qualified synthetic motor oil in 1972. Trust the extensive experience of AMSOIL, the First in Synthetics®, to do the best job protecting your engine.

Protects Flat-Tappet Cams
The lifters and cam lobes on flat-tappet camshafts common to classic and high performance vehicles slide rapidly against one another, producing high friction and heat. The friction between the two components can eventually wear down the cam and affect valve operation, ultimately resulting in lost engine power and reduced efficiency. In addition, these areas are splash-lubricated rather than pressure lubricated like other areas of the engine, which adds extra strain on anti-wear additives like the zinc and phosphorus in zinc dialkyldithiophosphate (ZDDP). 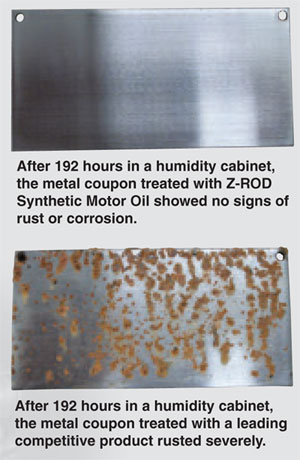 Provides Long-Term Protection from Rust & Corrosion
AMSOIL Z-ROD Synthetic Motor Oil is formulated with a unique blend of rust and corrosion inhibitors to ensure maximum protection during long-term storage. To prove its effectiveness, AMSOIL submitted Z-ROD Synthetic Motor Oil to the Standard Test Method for Rust Protection in the Humidity Cabinet (ASTM D-1748). This test evaluates the rust-preventative properties of oil under high-humidity conditions, similar to those faced by a covered hot rod in a damp garage. The metal coupon treated with AMSOIL Z-ROD Synthetic Motor Oil showed no signs of oxidation after 192 hours, while the coupon treated with a leading competitor’s product failed the test after 24 hours.