Automobile manufacturers want them. In fact, they’d like to see drain intervals as high as 15,500 miles.

Environmental groups, as well as the U.S. Environmental Protection Agency, want them because longer drain intervals mean less waste oil is disposed of. Motorists want them so they can avoid the hassle and expense of frequent oil changes.

Better wear protection is the ultimate goal of everyone.

Whenever the American Society of Testing and Materials (ASTM) convenes to discuss the next engine oil specification, wear protection is always a hot topic. An oil that offers superior wear protection is invaluable; vehicles last longer and perform better.

AMSOIL motor oils have offered extended drain intervals and the ultimate wear protection for almost 30 years. Combining the superior features of AMSOIL motor oil with an AMSOIL By-Pass Oil Filter offers the best of both worlds. AMSOIL By-Pass Filters remove the smallest of wear particles from the oil flow, keeping the oil analytically clean and serviceable for longer drain intervals.

How is this possible? A number of factors make the AMSOIL By-Pass Filter the ultimate wear protection and extended drain interval system:

Dramatically Reduces Wear
It is interesting to note that up to 60 percent of all engine wear is caused by dirt particles in the 5 to 20 micron range. These particles can get inside the precision clearances between bearings, rings and other engine components and cause severe damage. Unfortunately, full-flow filters are generally powerless against particles this small, effectively stopping particles in the 25 to 40 micron range. AMSOIL By-Pass Filters effectively stop particles smaller than than one micron in size, substantially reducing engine wear.

Prevents Oil Degradation, Rust and Corrosion
Damaging water molecules enter motor oil as a blowby combustion product of fuel ignition or as condensed moisture from air drawn into the engine. Water contamination of the motor oil can cause metal surface rust and corrosion, which increases friction and wear and deteriorates the close-fitting tolerances between engine components. In addition, water reacts with other oil contaminants to form corrosive acids, causing further damage to metal components. Full-flow oil filters are powerless against water, but the AMSOIL BE-90 By-Pass Filter effectively removes up to a pint of water, reducing the risk of oil degradation, engine rust and corrosion.

Extends Oil Drain Intervals
Because the AMSOIL By-Pass Oil Filter so effectively removes water and particles down to less than one micron, it significantly increases the time oil can safely be left in the engine. In fact, engines using AMSOIL Synthetic Motor Oil and an AMSOIL By-Pass Oil Filter routinely show much lower rates of engine wear, even when the oil is used for significantly longer drain intervals, than engines using conventional oils and 3000-mile drain intervals. Many users, with proper oil analysis, report drain intervals well past 100,000 miles. This saves motorists time and money, while creating far less used oil. 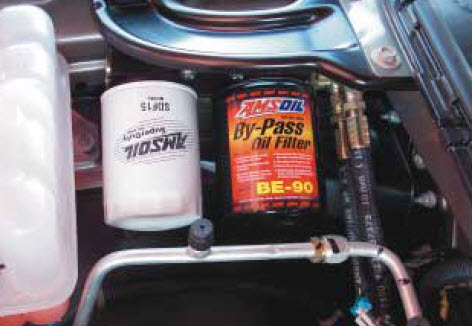 How Does it Work?
An engine’s full-flow oil filter must allow oil to pass through quickly to keep the engine from starving for oil.

As a result, only the coarser particles get filtered out. An AMSOIL By-Pass Oil Filter works in conjunction with the vehicle’s full-flow filter. It is situated outside the main line of oil circulation, tapping into the main line to bleed off and thoroughly filter 10 percent of the oil at a time, without obstructing oil flow. All of the oil in a six-quart system is filtered to analytical purity in about five minutes, at an average engine speed of 45 mph.

AMSOIL By-Pass Oil Filters feature a unique filtering media design and patented filter element design. The high-capacity filtration medium is a special blend of virgin cellulose and cotton fibers, formed into discs, stacked and compressed. The center tube is all-steel, perforated for oil flow, and wrapped with a fine mesh screen. Each filter includes a mounting unit with a spinon filtering cartridge, connected by hoses to engine ports. The entire system fits into cramped engine compartments, allowing for quick and easy access.

Dual Remote Filter System
The AMSOIL Dual Remote Oil Filtration System converts an engine’s full-flow oil filter system into a full-flow/bypass oil filtration system by attaching an AMSOIL Full- Flow Oil Filter and AMSOIL Spin-On By-Pass Oil Filter onto a remote mount. The mount and filters are installed in an accessible area of the engine compartment, making them simple to change. In addition, the remote placement of the filtration units allows larger oil filters to be used and increases oil sump capacity, extending the oil’s useful service life even further. The recommended replacement interval for the AMSOIL By-Pass Filter is 25,000 miles or one year (whichever comes first), while the recommended replacement interval for an AMSOIL Full-Flow Oil Filter is 12,500 miles or six months (whichever comes first) in gasoline-fueled engines, twice as often in diesel engines.