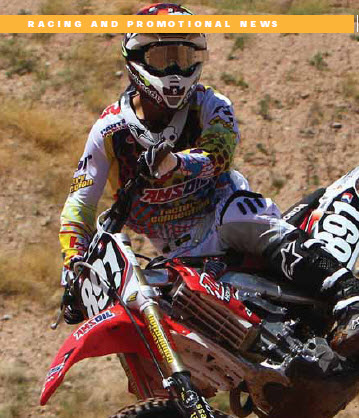 And he did. Bogle dominated the 450 A class, sweeping all three motos for the championship.

With one title under his belt, Bogle set his sights on another in the 250 A class. After finishing second to Kyle Peters in the first moto, Bogle edged Peters in the second moto to set up the winner-take-all third moto. Peters took the early lead and led the entire race as Bogle concentrated on chasing him down. Entering the final laps, Bogle laid the pressure on Peters, who started getting caught in lapped traffic. Both riders were forced to make alternate line choices in the most crucial point of the race. Although Bogle closed in, he couldn’t complete the pass in time and took second.

Bogle capped off his amateur career by earning some prestigious hardware at the AMA Amateur Nationals closing ceremonies. Following in the footsteps of former Team AMSOIL rider Trey Canard, Bogle was presented with the AMA Horizon Award, awarded annually to an amateur racer poised to succeed at the pro level. Bogle also earned the Vurb Cup, presented to the rider with the best average moto finish at Loretta Lynn’s. Bogle finished first or second in all six of his motos; he joins new pro teammate Eli Tomac as a winner of the Vurb Cup.

Bogle made his professional motocross debut with Team Geico/AMSOIL/Honda at the Unadilla National in New Berlin, N.Y. on August 13. he’ll compete in the final four events of the 2011 AMA Motocross season.

Thousands of metrics can be called upon to see how valuable a sponsorship is to a company. I don’t want to get into all of them here, but paying attention to how other companies advertise is one way to gauge how much exposure AMSOIL is receiving.

I was recently at the AMA Amateur Nationals presented by AMSOIL in Tennessee. It was easy to see how well the company’s relationship with the Factory Connection team was paying off in the form of “piggyback” advertising.

Thor, a major sponsor of the event, used images of several AMSOIL riders, including top amateur Justin Bogle, in its on-site signage. Moto Playground is a leading amateur motocross magazine and brings thousands of August issues to Loretta’s. Just inside the cover were not one, but two, full-page ads featuring AMSOIL pro riders Justin Barcia and Eli Tomac. Companies like Fox, Geico and Dunlop place ads year-round that feature highly visible AMSOIL logos.

The great thing about this advertising is that there is no direct cost to AMSOIL. It’s simply an added bonus to sponsorships that already produce great results.