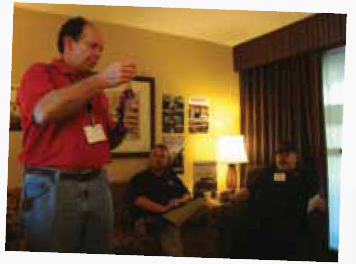 The Internet, newsstands and airwaves contain a virtually endless supply of content devoted to auto enthusiasts of all stripes. It’s here where everyone from average daily commuters to tech-savvy gearheads encounter AMSOIL products and messaging, often for the first time. Unlike most multi-level marketing companies, AMSOIL INC. helps Dealers by strategically placing advertisements in popular magazines, including Mopar Muscle, American Motorcyclist, Diesel Power and more. AMSOIL also cultivates lasting relationships with editors that can result in articles mentioning AMSOIL products. This investment, now growing to include websites and television shows, initiates a rapport with enthusiasts that often culminates in them becoming loyal AMSOIL customers.

MPMC 2011
Participating in the annual Motorsports Parts Manufacturing Council (MPMC) Media Trade Conference in Los Angeles, Calif. has gone a long way toward increasing the visibility of AMSOIL in the media. The MPMC is an arm of the Specialty Equipment Manufacturers Association (SEMA), which has grown to more than 6,000 member companies worldwide. The annual SEMA convention and trade show during the first week of November is one of the largest in Las Vegas, as well as a Mecca for performance auto enthusiasts.

Interest in AMSOIL Strong
Held every January, the MPMC conference provides a venue for 100 of the top SEMA manufacturers to meet with national media away from the glitz and glamour of the SEMA show. This year, AMSOIL INC. was represented by Director of Advertising Ed Newman and Technical Powersports Product Manager Len Groom. Over the course of three days, Newman and Groom participated in 41 different 30-minute meetings with publishers and editors representing magazines that cover Corvettes, Mustangs, Mopar and GM muscle cars, diesel trucks, off-road racing, street rods, import tuners, classic trucks and more. A large contingent of editors from websites, including fordmuscle.com and streetperformance. com, also attended.

Media Relationships Important
Just as important as showcasing products, the meetings often help provide editors with the knowledge they need to write future articles. For example, the tiered-surfactant technology behind Dominator Coolant Boost can confuse those unfamiliar with how it works. Talking with Groom, one of the people responsible for its formulation and testing, allows editors to clearly understand the market demand for the product, how it works and why it outperforms competing products. Editors can then craft an article from the information, often including references to AMSOIL. In this way, readers develop an understanding of the challenges posed to automotive cooling systems and the technology available to improve performance. It’s meetings like these that make the annual MPMC conference valuable to AMSOIL and its Dealers. Collaborating with automotive magazines and websites prepares their legions of dedicated readers to respond positively to AMSOIL products when meeting a Dealer for the first time.

In addition to deepening existent media relationships, Newman and Groom also had multiple opportunities to present those not as familiar with the company the story of how Lt. Col. Albert J. Amatuzio introduced synthetic lubrication technology to the auto industry.

Dealers Stand to Benefit
This marked the fourth straight year of AMSOIL involvement in the MPMC Media Trade Conference, and the benefits become more apparent as an increasing number of editors and publishers seek to establish relationships with AMSOIL. MPMC is just one more way AMSOIL spreads the word and helps Dealers build their businesses.