Kevin Harrington of Stratham, N.H. began using AMSOIL Synthetic Motorcycle Oil this year and was eager to tell others of his experience.

“I am a new customer to AMSOIL,” Harrington said. “After several years of riding motorcycles, this season I decided to try AMSOIL.”

Harrington purchased AMSOIL 10W-40 Synthetic Motorcycle Oil for his 2002 Honda CBR954RR. “I have used Hondabranded GN4 and HP4 non-synthetic and synthetic oils for the history of owning this motorcycle from new,” he said. “The routine change intervals have been every 2,000 miles.”

A technician told Harrington when he bought the bike nearly 10 years ago that shifting would be “clunky as a normal condition.” According to Harrington, the wet-clutch lubricity has improved shifting smoothness significantly.

“The motorcycle cooling system temperature ran consistently at 187 to 194 degrees when cruising at 65 MPH for extended periods during 75-degree weather while running GN4 or HP4 oils,” Harrington said. “I have noticed a repeatable temperature reading of six to nine degrees lower under the same degree [temperature] day and speed conditions. It now runs at about 183 to 189 degrees consistently.”

AMSOIL Synthetic Motorcycle Oil has made noticeable improvements in the Honda’s operation.

“I am convinced that AMSOIL motorcycle oil is clearly the renewal required for my high-performance motorcycle and superior to other commercially available products,” Harrington said. “No other oil will be used in my CBR954RR unless AMSOIL introduces an even better product that exceeds the practical application and test results of the AMSOIL 10W-40 Synthetic Motorcycle Oil. “I’m delighted.” 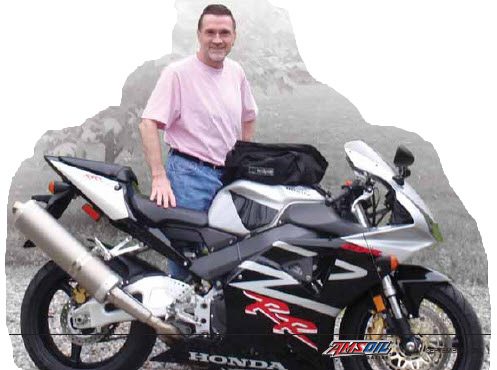