In a recent real-world field study, AMSOIL Synthetic Polymeric Truck, Chassis and Equipment Grease (GPTR2) reduced grease consumption and demonstrated superior pound-out and washout resistance compared to a competing synthetic EP grease. The field study subjected both greases to identical operating and weather conditions in a 2003 front-loading Autocar Ignitor refuse hauler. During the 56-day study, the refuse hauler was placed into daily service unloading over 100 commercial dumpsters during a 12-hour shift. The vehicle routinely encountered adverse weather and extreme-pressure environments that can pound-out and washout inferior greases, causing corrosion and wear, which provided the ideal environment for testing greases.

Test Parameters
Synthetic Polymeric Truck, Chassis and Equipment Grease was installed in one side of the vehicle using a manual pistol- grip style 6,000 psi grease gun, while the competing grease was installed in the identical components on the opposite side. After operating the vehicle to ensure complete removal of the old grease, the refuse hauler underwent a series of three re-greasings throughout the field study. The number of pumps required to properly lubricate the 19 grease points on each side of the vehicle was recorded. A visual inspection of each grease point was also conducted to record abnormal conditions, including excessive grease consumption and the presence of water.

Results – Washout/Pound-Out
Throughout a 12-hour shift, the hoist, lift arms, king pins and other components responsible for raising heavily loaded dumpsters repeatedly encounter extreme pressures that can poundout inferior greases. Without grease in place acting as a seal, water and other contaminants can penetrate the area, causing corrosion and wear. In addition, metal-to-metal contact results, ultimately causing component failure. AMSOIL Synthetic Polymeric Truck, Chassis and Equipment Grease resisted pound-out to stay in place longer than the competing grease, forming an effective seal to repel water and other contaminants. In multiple instances, visual inspections found water between surfaces greased with the competing product. The side of the vehicle lubricated with AMSOIL, however, resisted washout due to the product’s superior adhesion and cohesion properties and did not allow water to enter greased areas. 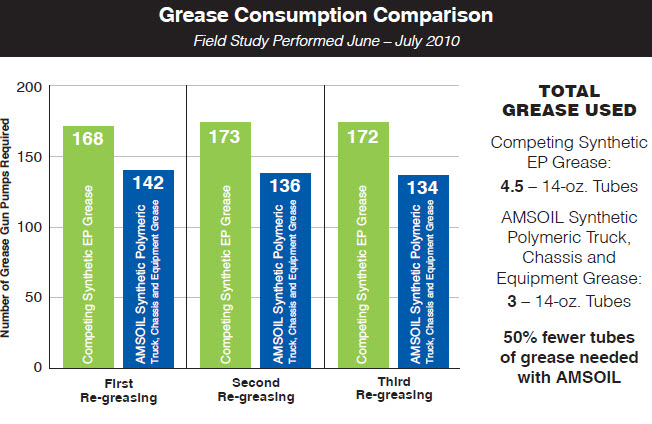