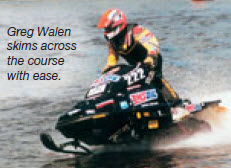 Who needs snow for snowmobile racing? Certainly not Walen Brothers Racing. They prefer the open water of a lake. This snowmobile watercross team has been making waves in the upper Midwest for years.

The Ski Doos that Greg and Jim Walen use look very similar to the familiar black sleds that Team AMSOIL/Scheuring Speed Sports ride on the World Snowmobile Association circuit. It’s odd to see snowmobiles on water and you might scratch your head and wonder, “How do they do that?” The sleds are surprisingly buoyant, but speed is the key. There are some modifications to the body, but essentially they’re the same as regular sleds under the hood with AMSOIL products still being the preferred choice.

AMSOIL Direct Jobber Lynn Pabst and Dealer Joe Rogers take an active role with the team. Not only do they sponsor the racers, they also work as crew members. Last season Jim had six top five finishes. Greg was in the top ten twice.

From the AMSOIL Dealer Sales Department