The AMSOIL World Championship Snowmobile Derby took place January 13-16 at the AMSOIL Eagle River Derby Track in Eagle River, Wis. and featured one of the most exciting races in the event’s 48-year history, with Team AMSOIL ice oval racer P.J. Wanderscheid coming out on top and making history in the process.

The event kicked off Thursday with practice and time trials, where Wanderscheid clocked in third fastest. Friday featured the Friday Night Thunder program, where pole position in Sunday’s feature race was at stake. After winning his eight-lap heat race, Wanderscheid took the early lead in the 16-lap final and didn’t look back, taking the win, securing the pole position in Sunday’s feature and earning a day of rest and preparation on Saturday.

Starting Sunday with practice laps, Wanderscheid clocked in with the fastest time. The World Championship race featured a different format this year, increasing from 25 to 30 laps that were split into two sections. Drivers raced 15 laps, took a five-minute pit session, then resumed the final 15 laps with a staggered start according to how drivers finished the first 15 laps.

Upon the start, AMSOIL-backed driver Gary Moyle jumped out to the early lead with Wanderscheid close behind. Moyle led the entire 15 laps, with Wanderscheid narrowing the gap slightly on lap 13. After the pit stop, Moyle and Wanderscheid thrilled fans with an epic battle for the title as they continually exchanged the lead. Wanderscheid took the lead for good on lap 29, taking the win and going down in history as the only racer to win four AMSOIL World Championships. Moyle took second, followed by ice oval racing legend Jacques Villeneuve.

On Sunday, Martin took the Pro Stock final win, followed by Malinoski in second, Kaven Benoit in third and AMSOIL/ Scheuring Speed Sports racer Darrin Mees in fourth. Sunday’s Pro Open final featured an exciting battle between Martin and Turcotte, culminating with an awe-inspiring charge by Martin from the final turn to the finish line for the win. Turcotte finished second, Broberg third and Malinoski fourth. 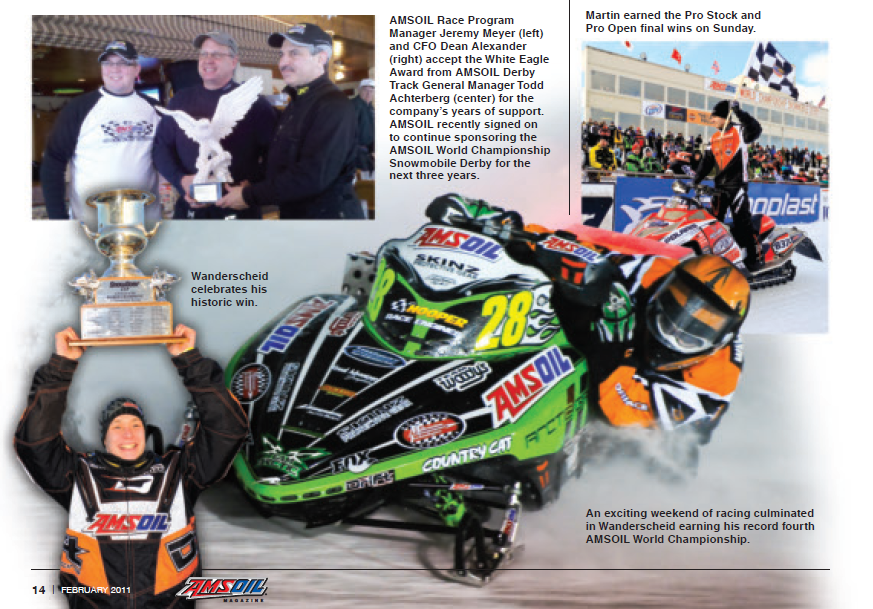 A Change of Drivers, but a Commitment to AMSOIL Pays Off for Bonicelli Racing