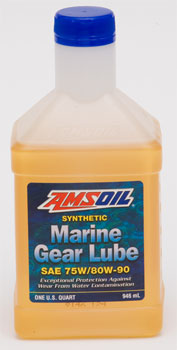 Marine gear oils operate in environments subject to water contamination. The chart below demonstrates the ability of AMSOIL Universal Synthetic Marine Gear Lube to maintain designed qualities such as extreme pressure/anti-wear performance and resistance to foaming, even when subjected to 10% water contamination.

The presence of foam in a lubricant disrupts oil film and promotes wear. Water contamination can increase the likelihood of foaming. Industry standard testing demonstrates zero foam in both new and water-contaminated AMSOIL Universal Synthetic Marine Gear Lube. Other conventional gear lubes can foam when mixed with water, as seen in the graph.

It is generally a good idea to change gear lube at the end of the season prior to storage.