Werder, of Shawangunk, N.Y., rode an additional 100,000 miles aboard his bike by May 2008. He will donate the bike, known as “Traveler,” to the National Motorcycle Museum in Anamosa, Iowa.

Werder’s Victory remains the world’s highestmileage bike for the brand since the first Victory V92C production model rolled off the assembly line on July 4, 1998. “It still attains 60 miles per gallon,” he said.

Werder traveled 200-plus miles daily to his job until a state layoff late in 2009, which helped him achieve a motorcycle mileage nearing 700,000 miles. His high-mileage Victory is the third motorcycle he has ridden past 100,000 miles, and his first past the 200,000-mile mark.

“I also use AMSOIL Shock Therapy Suspension Fluid #10 (STM) in the shocks on the bikes and AMSOIL P.i. Performance Improver gasoline additive in all of my vehicles,” Werder said. “My 2004 Chevrolet Aveo has 157,000 miles, and my wife’s 2003 Subaru Forester has 107,000 miles. Neither has ever had a lick of trouble.” 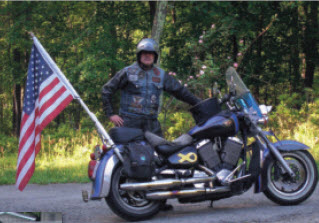 HISTORY-MAKING MILEAGE — AMSOIL Dealer Tim “Roadkill” Werder of New York will donate his 1999 Victory V92C motorcycle to the National Motorcycle Museum with more than 200,000 miles on the engine.

His daily commute now is only 50 miles. “I’m stunned at the amount of money I’m saving in fuel costs,” Werder said. “I joke with friends that the gas companies keep sending me ‘We Miss You’ cards.”

Werder continues to ride his bikes year round, even in the cold Northeast winters. In fact, he bought his 2008 CanAm Spyder Roadster GS reverse trike because he wanted to ride through the winter without falling down. He has put 40,000 miles on it in two years.

“I tell everyone they should ride until they can’t, be it due to weather tolerability, cold endurance, whatever,” Werder said. “I just happen to also like riding in cold weather, so my motorcycle riding season simply doesn’t end.”

Within the past several years, Werder also has kept busy fighting for riders through motorcyclists’ rights organizations, including serving as state president of ABATE of New York, Inc. In fact, he broke the 200,000-mile mark on his record-setting Victory motorcycle on the way home from leading ABATE of New York at its annual motorcyclist rights rally on the steps of the state capitol in May 2008.

He adds his mantra, “Pay attention to the bike’s maintenance basics for longevity. Pay attention to your own riding skills for survivability. And then just ride the hell out of it.”

As Roadkill says, “Ride on.