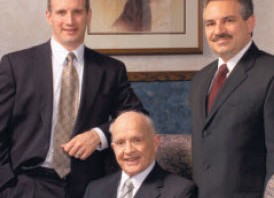 From the President's Desk

It wasn’t all that long ago that the business of selling AMSOIL motor oil involved much more than just selling oil. Plenty of legwork had to be done before any transactions were completed. Hurdles had to be cleared, and mindsets had to be altered. Synthetic oil was still new on the scene, and customers required education. “What makes the oil so special,” they asked, “and why should I pay more for it?”

Despite the obstacles, our Dealers made tremendous inroads. The savvy segment of the motor oil market recognized the benefits of our oil. The performance made a difference. Then, as other synthetic oils began to appear, the demand for our products continued to climb. Others now shared in the education process and added support to the movement we started.

That movement has even more support today. In a market where once the automakers, oil manufacturers and industry organizations essentially closed us out, synthetic lubricants are now chewing up shares. As you will read on pages 10 and 11 in this issue of your Magazine, all of the forces that drive the motor oil market are pushing greater demand for synthetics.

In 2005 synthetic motor oil claimed five percent of the market. Today it claims seven to nine percent, and by 2019 it is projected to claim twelve and a half percent. That is tremendous growth in a very large market, but I think even that is conservative.

We can look back to just 1992 when General Motors broke ground by requiring that every Corvette rolling off its assembly lines be factory filled with synthetic oil. Eight Corvette engines had seized at the General Motors assembly plant in Bowling Green, Kentucky. Cold weather had moved in, and the thick, hard-to-pump oil did not reach the front camshaft bearings which were destroyed by lack of lubrication. At 30 degrees, incidentally, it wasn’t all that cold. It doesn’t speak well for conventional oil.

The move of General Motors to synthetics, of course, was just the first of many. Advancements in engine design are now demanding more from lubrication. Take a look at the list on page 11 in this issue of the vehicles now factory filled with synthetic motor oil. That list will continue to grow.

The organizations responsible for setting lubricant performance specifications are driving the demand for synthetics too. Oils are now required to be much more robust. Specifications calling for better wear protection, greater engine cleanliness, improved fuel economy and reduced emissions are making it more difficult for conventional oils to make the grade. And the growing demand for extended oil drain intervals continues the push for synthetics.

AMSOIL has led the way for close to forty years and has helped drive the course of lubrication. We have earned our reputation through the quality of our products, and the diversity of our product line meets the demands of all customers. As more people look to synthetic oil they will look to AMSOIL.

It all points to opportunity, and the introduction of our new OE 15W- 40 Synthetic Diesel Oil expands that opportunity even further. At a lower cost than our extended drain diesel oils, OE Diesel reaches those motorists who appreciate the performance of synthetic oil but aren’t yet ready to move up to extended drains. It’s the ideal oil for those diesel applications affected by the fuel dilution issues that prohibit extended drains. Owners of 2007 and newer Ford, Dodge and GM diesel pick-ups will appreciate the value of our new OE Diesel. With OE, they get AMSOIL quality at a price comparable to standard-drain diesel oils.

As a final note, I want to thank the Dealers who attended our AMSOIL University. I enjoyed seeing all of you and congratulate you for taking a major step toward even greater success in your AMSOIL Dealership. I encourage all Dealers to join us next year. And to all of our Preferred Customers, I can assure you that at any time you feel that an AMSOIL Dealership is right for you, we will do all we can to help in your success too.