Amsoil synthetic lubricants figured prominently in the Vetter Fuel Economy Challenge held May 13 in northern California, where a diesel-powered motorcycle using AMSOIL products won by achieving 128.24 mpg. Many of the other bikes also relied on AMSOIL products to help achieve results nearly as impressive.

Competitors completed a 133.5-mile course designed to provide real-world, challenging conditions. The trip, beginning and ending in Carmel, Calif., included mountainous terrain cresting a 2,500-foot pass, while the return ride along the famous El Camino Real subjected riders to 30 mph headwinds that tested the limits of each motorcycle’s fuel efficiency held at various places throughout the country, the Vetter Fuel Economy Challenge dates to 1980 and aims to encourage development of motorcycle technologies that improve fuel economy while remaining viable for everyday drivers. 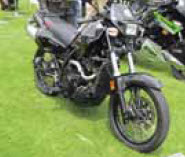 The Hayes-DT Street Fighter
acheived 90.82 mpg running biodiesel
and Amsoil Lubricants through out.

The winner must consume the least amount of fuel measured in dollars and cents while meeting all prescribed conditions. Hayes used $4.53 in biodiesel, essentially one gallon, to travel the entire 133.5 miles in challenging conditions, highlighting the bike’s impressive technology and the effectiveness of AMSOIL products. Hayes said his bike showed measurable improvements running Series 3000 5W-30 Synthetic Heavy Duty Diesel Oil and Diesel Concentrate, including easier shifting from the transmission. Competitors had to remain ahead of a trailing official at all times to prevent them from padding fuel economy statistics by driving slowly. Two bikes were disqualified for doing so.

AMSOIL-sponsored Hayes-DT focuses on developing the world’s most cuttingedge, heavy-fuel-powered, light tactical vehicles and small engines for military use. In fact, key Hayes-DT corporate personnel have served in modern military conflicts deployed on Hayes-DT military motorcycles. The bikes receive the most use from the Combat Military Police for route recognizance and convoy control.

A second Hayes-DT bike, the Street Fighter, was disqualified after a battery problem caused it to miss the official start. Following repairs, driver Josh Chen rallied to complete the course anyway, achieving 90.82 mpg, which would have been good enough for third place. The Street Fighter used the same lineup of AMSOIL products as the MD670 F2. Although neither motorcycle is available to the general public yet, Hayes-DT is currently working on EPA and EU emissions certification. Until then, competitions like the Vetter Fuel Economy Challenge allow Hayes- DT to showcase the advanced technologies of their bikes and the performance benefits of Amsoil synthetic lubricants and additives.