The test vehicle was a 1995 Freightliner FLD-120 powered by a Detroit 60 Series diesel engine and utilized mainly in long-haul transports. The testing covered a two-year period and the vehicle accumulated 212,326 total miles.

Evaluation Proposal
The goals for this demonstration included showing that the use of AMSOIL Series 3000 5W-30 Heavy Duty Diesel Oil, in conjunction with the AMSOIL Dual-Gard filtration setup and SDF Oil Filters, would result in improved efficiency, reduced operating costs and environmental benefits when compared to conventional petroleum lubricants and filtration methods. 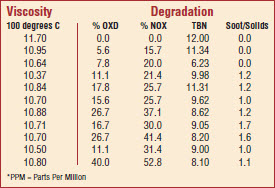 As mentioned, the evaluation was conducted using a 1995 Freightliner FD-120 equipped with a Detroit 60 Series diesel engine. The AMSOIL Series 3000 5W-30 Heavy Duty Diesel Oil was sampled at the manufacturer’s suggested oil drain intervals and monitored through the use of oil analysis to ensure its continued serviceability. The full-flow filtration units were also monitored and replaced at 12,000- to 15,000-mile intervals, while the By-Pass units were monitored and replaced at 24,000- to 30,000-mile intervals.

Summary
Overall, the demonstration was a success. After switching to AMSOIL Series 3000 5W-30 Heavy Duty Diesel Oil (and later AMSOIL 75W-90 Gear Lube in the differentials and Power-Shift Transmission Fluid in the Transmission), the truck experienced significant declines in wear rates and an eight percent increase in fuel economy. The pictured charts show individual rates of wear throughout the two-year demonstration. As the engine wear rates were reduced, operating efficiency rose, leading to an increase in the life of the engine and decreasing operating costs. Even with 212,326 miles on the oil, there was no indication it needed changing.

Because of the extended drain capabilities of AMSOIL Series 3000 5W-30 Heavy Duty Diesel Oil, the negative effects of used oil on the environment were also significantly reduced. If it had been using conventional petroleum diesel oil, which usually requires replacement approximately every 18,000 miles, this application would have required up to 12 oil changes and 480 quarts of oil over the demonstration running time of 212,326 miles, compared to just one oil change and 40 quarts of oil using AMSOIL Series 3000 5W-30 Heavy Duty Diesel Oil and Dual-Gard filtration system. 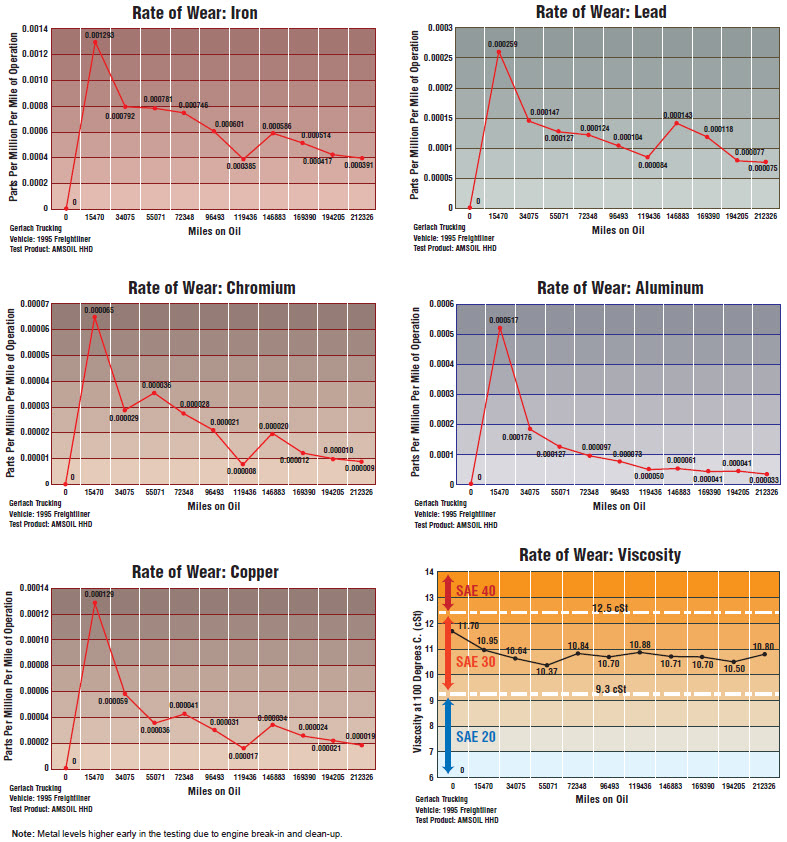