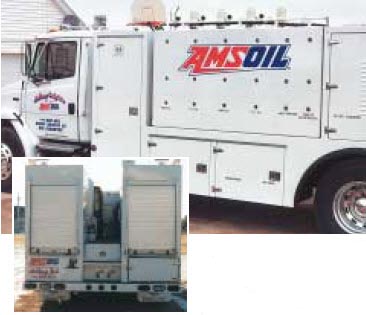 Direct Jobbers Ivan and Pam Anthony of Monument, Colorado have the perfect vehicle to compliment their growing AMSOIL business. Their new maintenance truck is completely outfitted to service the lubricant needs of local contractors.

“We are personally servicing over 100 pieces of equipment with AMSOIL products,” Pam Anthony said. One contractor whom they service has 18 different excavators including a 365 Caterpillar which weighs over 155,000 pounds. These machines require serious lubrication, and the Anthonys have been ready to demonstrate that AMSOIL lubricants can offer serious value. “The contractor has reported that their maintenance costs are down,” Anthony said. “We are extending their engine oil drains up to four times longer and their transmission oil drains up to six times longer. And their engine wear rates have been cut by 20 to 60 percent.”

At one point, Ivan Anthony knew that a 3306 engine he was servicing had a worn camshaft because a routine oil analysis told him the iron in the oil was up to 1,500 ppm with 250 hours of service on a petroleum-based oil.

Anthony switched the equipment’s oil to AMSOIL synthetics, and the iron levels dropped to under 50 ppm.

When the engine was torn down for an overhaul 1,000 hours later, Anthony found that the camshaft lobes were completely worn off. The AMSOIL synthetic lubricants had been able to reduce the wear long enough for the equipment to make it to its next scheduled overhaul. “This is just one example of the remarkable results we have seen with AMSOIL lubricants,” Anthony said. “We enjoy our AMSOIL business and the people we are able to help with AMSOIL products.”

“The Bird” Flies With AMSOIL