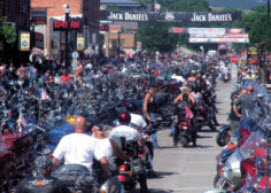 Attendance at the 70th Annual Sturgis Motorcycle Rally was up from previous years, drawing an estimated 750,000 people.

The 70th Annual Sturgis Motorcycle Rally took place August 9-15, drawing an estimated 750,000 motorcycle enthusiasts and potential AMSOIL customers to the Black Hills in Sturgis, S.D. for the week-long event. With AMSOIL in its third year as the Official Oil of the world famous rally, the company’s visibility was larger than ever. A large AMSOIL banner once again greeted visitors as they entered town on Junction Avenue, and with 90 AMSOIL signs gracing the many barricades located throughout the downtown area, the AMSOIL logo was impossible to miss. 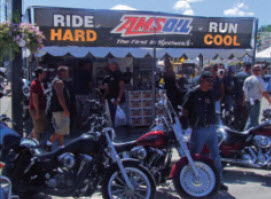 The AMSOIL booth was buzzing with potential customers each day of the rally.

Thousands of people walked by the AMSOIL booth each day, where AMSOIL corporate staff were busy spreading the word about the many benefits of AMSOIL products. Temperatures reaching over 100°F provided a perfect opportunity to promote the high temperature benefits of AMSOIL synthetic motorcycle oils.

“The response to AMSOIL at the Sturgis Motorcycle Rally this year was nothing short of spectacular,” said Director of Dealer Sales Rob Stenberg. “The visibility of the AMSOIL logo was unsurpassed, and because attendees traveled from all parts of North America to attend, the company’s presence provides a significant benefit to AMSOIL Dealers everywhere.”

AMSOIL established a corporate presence at Sturgis in 2006 and signed on as the Official Oil in 2008.
John