We received a letter recently from the owner of the AMSOIL snocross team, Steve Scheuring, that I am going to share with you. Steve and Team AMSOIL racer Robbie Malinoski received it from a fan who attended the AMSOIL Championship Snocross Series race in Fargo, North Dakota. It illustrates the value the team brings to the table. It has nothing to do with winning or losing or performance on the track; it has everything to do with representing AMSOIL at the highest possible level. The letter:

My son and I were at the Fargo race today. It was very cold, and I thought it would help to warm up to walk the pits for a bit. It had been a few years since we had been at a race, and I had forgotten the thrills of the sights, sounds and smells of the speed and excitement. When I was young, my dad took us to an oval or cross-country race every weekend. I have tried to continue this with my son, but his basketball has hindered our travel.

During a stop by the staging area near the pit, we were standing near your trailer viewing the rush of sleds being made ready for the next race. We both must have looked frozen, and we were very surprised when Robbie Malinoski stopped by to ask if we would like to come into the trailer to warm up. You have no idea what this meant to a father and son. My son has not yet quit smiling. With this simple act of kindness you and your team changed his impression of racers, trailers and mechanics by showing a very caring human side to the young man. His phone battery ran dead as we left the track as he was texting and calling all of his buddies to let them know he was with you in your race trailer. After arriving home, he ran into the house to let his mom know he had changed his mind on his future profession from a carpenter to a race mechanic.

Even though more races and travels may lead to a more costly winter for Dad’s wallet, it is worth every penny. His 2003 REV will even have a number 4 (Malinoski’s number) on it. I know how busy your time is when at the track, but your kindness and caring today will never be forgotten. Thank you very much, and I wish the best of luck for you and the team for the rest of the year. After this year you may see a certain young man at the race track much more often with his dad. 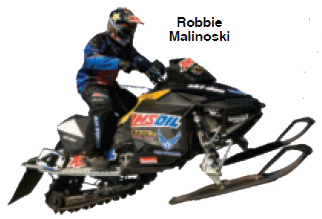 What Robbie Malinoski and the AMSOIL crew did went unnoticed by the thousands of fans that day. It will not show up in the points standings and will do nothing to improve the team’s performance. But it did mean a great deal to a father and son, and it did reflect positively on AMSOIL. It enhances the image and reputation that we have worked so hard to establish.

It is not uncommon for a race team we sponsor to go the extra mile for us. We approach our sponsorships differently than many other companies do. Our goal is to build relationships that last beyond the terms of typical contracts. While other sponsors may come and go, we do not jump from one sponsorship to another. We have been with Steve Scheuring, for example, for fourteen years. We have sponsored the same supercross/motocross team for thirteen years. Our power boat racers, Terry Rinker and Bob Teague, have been with us for eight and five years, respectively. And off-road racer Scott Douglas will begin his sixth year driving for AMSOIL next season. Our teams appreciate our loyalty and go over that loyalty to us. Even my good friend Bobby Unser, who we no longer sponsor, of course, continues to promote AMSOIL at every opportunity he gets. We built a relationship, established the loyalty and it is still paying dividends for us. To our racers, an AMSOIL sponsorship means much more than just the dollars it represents.

So I thank Steve Scheuring, his team and all of the other racers who proudly wear the AMSOIL colors. They represent us well.

Letters to the Editor August 2011

A Change of Drivers, but a Commitment to AMSOIL Pays Off for Bonicelli Racing