Kevin Windham has proven not every champion claims the most points at the end of the season. Despite a pair of Supercross West Lites championships early in his career. 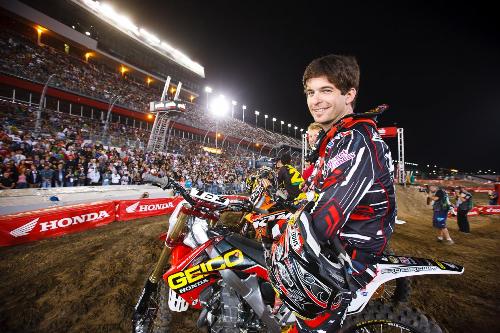 He has yet to win a title riding a 450, finishing second in season points more than any other rider in history. He also holds the distinction for winning the most races without a Supercross or Motocross title to show for it. But few would know it given his popularity.

Known as “K-Dub,” the 33-year-old has earned a reputation as one of the most approachable and graceful riders in moto. The massive jumps and signature whips he performs during pre-race introductions have won him a legion of fans across North America and title of the “People’s Champ.”

Following his early success racing 250's, K-Dub consistently challenged legends Jeremy McGrath and Ricky Carmichael for titles, falling short each year. One of Windham’s toughest moments came in 2002, when he broke his femur and left racing for more than a year. In 2003 he returned aboard the AMSOIL/Factory Connection Honda CRF450R and was the only rider able to keep the dominant Carmichael in his sights, taking a pair of wins but again falling short of the championship.

Between Supercross and Motocross, the Baton Rogue, La. native has finished the season in second place a combined eight times. Today, the oldest rider on the track is still in hot pursuit of that elusive championship riding for the /Geico/AMSOIL/Honda team.

He resides in Centreville, Miss. with wife Dottie and their three children. When not flying high on his Honda, K-Dub pilots his personal airplane out of his home hangar in Mississippi.

Windham finished fifth at the Dallas Supercross this past weekend. Monster Energy Supercross heads to St. Louis this Saturday.

Packing on the Miles and Using AMSOIL in the Aloha State